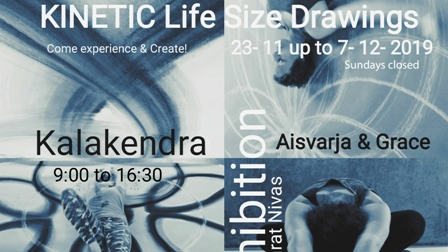 'Kinetic Life Size Drawing' comes from a yearning to make visible a movement in
Time and Space. To Move is an ephemeral, at times even fleeting, emotional
experience of the one generating or creating it. But when this movement leaves a
visual trace on any kind of surface, be it sand, earth, rock, even paper it becomes
perceivable to not only its creator but to others and can even remain long after its
generating force, gesture, movement has left. Then a nonverbal perceivable narrative
remains!
Grace Gitadelila makes use of 'Kinetic Life Size Drawing' in her KolamYoga
training courses to awaken within the participant a better understanding of their own
unique physical proportions, their dimensions and how they act in Time and Space.
This is very crucial in becoming a 'vehicle generator of sacred geometries' that form
the foundation and structure of the entire Yantra-, Mandala- Kolam lexicon.

Aisavarja 2014- 2015- 2016 the was SEAS and now 2019
From the age of six, every year, my mom and I explored our body proportions using
this drawing technique. At first, we both drew on the same paper, out of curiosity to
see how we fit together and to notice the symmetries between our two, very different
sized bodies. Out of this exploration we came up with the first drawing called The
Four Trees. During the first year, I created a solo piece called The Owl, this was my
first time doing it alone and connecting with my drawing. This experience was a
strong message for me because out of my drawing, this beautiful animal appeared
itself to me and I recognized it as an owl. Then, with each passing year, I continued
to explore new shapes and movements, sometimes with my friends, alone, or with
my mother. As I grew older, I grew taller and my proportions and movements were
changing and new experiences added to my past memories. This year, being my most
recent, was different by far because I could understand the concepts better and have
another way of interpreting my drawings. Now they are more abstract compared to
the ones I made as a few years ago where I related more to nature and its creatures.
I hope with this sharing of my experiences helps to inspire you to explore oneself

The Process
The first step is to explore the paper with your hands, making sure your
body fits in the paper in all directions. Having done that, you pick up two
blocks of chalk that fit comfortably in your hands and choose a position
in the middle of the paper. Then with closed eyes, start drawing with both
hands simultaneously. Make sure whatever you do with the right
hand/side you do the same on the left. Keep repeating the same
movements at least 3 times before starting something knew so you can
really feel and know what your doing with your body. The eyes remain
closed during this entire process. Try to explore the four directions of
space; front, back, and sides. It doesn’t matter what body position you
take, whether its on your back, stomach, knees, or anywhere else just don’t
be afraid to really express yourself. Think of it like a dance if you will.
swathe of modern art from Impressionism onwards. In presenting works of art which
moved, or which gave the impression of movement - from mobile, mechanical
sculptures to Op art paintings which seemed to rotate or vibrate in front of the eyes
- Kinetic artists offered us some of the most quintessential expressions of modern
art's concern with presenting rather than representing living reality. Tracing its
origins to the Dada and Constructivist movements of the 1910s, Kinetic art grew into
a lively avant-garde after the Second World War, especially following the genredefining
group exhibition Le Mouvement, held in Paris in 1955. The group was
always defined by division, however, and after thriving for around a decade, interest
in the style faded; however, its ideas were carried forward by subsequent generations
of artists, and it continues to provide a rich source of creative concepts and technical
effects up to the present day.
Key Ideas
In creating paintings, sculptures, and art environments which relied on the
presentation of motion for effect, the Kinetic art movement was the first to offer
works of art which extended in time as well as space. This was a revolutionary
gesture: not only because it introduced an entirely new dimension into the viewing
experience, but because it so effectively expressed the new fascination with the
interrelationship of time and space which defined modern intellectual culture since
the discoveries of Einstein.
Kinetic artists often presented works of art which relied on mechanized movement,
or which otherwise explored the drive towards mechanization and scientific
knowledge which characterized modern society. Different artists expressed a
different stance on this process, however: those more influenced by Constructivism
felt that by embracing the machine, art could integrate itself with everyday life,
taking on a newly central role in the Utopian societies of the future; artists more
influenced by Dada utilized mechanical processes in an anarchic, satirical spirit, to
comment on the potential enslavement of humankind by science, technology, and
capitalist production.