The Ring of Brodgar - Stonecircles in Orkney, Scotland 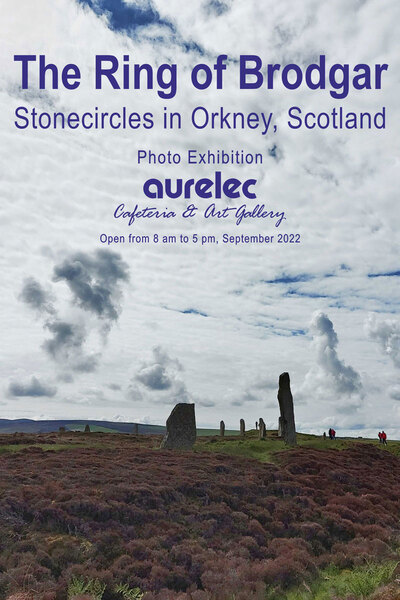 The Ring of Brodgar

The Ring of Brodgar (or Brogar, or Ring o' Brodgar) is a Neolithic henge and stone circle in Mainland, Orkney, Scotland. It is the only major henge and stone circle in Britain which is an almost perfect circle. Most henges do not contain stone circles; Brodgar is a striking exception, ranking with Avebury and Stonehenge among the greatest of such sites. The ring of stones stands on a small isthmus between the Lochs of Stenness and Harray. These are the northernmost examples of circle henges in Britain. Unlike similar structures such as Avebury, there are no obvious stones inside the circle, but since the interior of the circle has never been excavated by archaeologists, the possibility remains that wooden structures, for example, may have been present. The site has resisted attempts at scientific dating and the monument's age remains uncertain. It is generally thought to have been erected between 2500 BC and 2000 BC, and was, therefore, the last of the great Neolithic monuments built on the Ness. A project called The Ring of Brodgar Excavation 2008 was undertaken in the summer of that year in an attempt to settle the age issue and help answer other questions about a site that remains relatively poorly understood. The results of the excavation are still preliminary.

The stone circle is 104 metres (341 ft) in diameter, and the third largest in the British Isles. The ring originally comprised up to 60 stones, of which only 27 remained standing at the end of the 20th century. The tallest stones stand at the south and west of the ring, including the "Comet Stone" to the south-east. The stones are set within a circular ditch up to 3 metres (9.8 ft) deep, 9 metres (30 ft) wide and 380 metres (1,250 ft) in circumference that was carved out of the solid sandstone bedrock by the ancient residents.
The monuments at the heart of Neolithic Orkney and Skara Brae proclaim the triumphs of the human spirit in early ages and isolated places. They were approximately contemporary with the mastabas of the archaic period of Egypt (first and second dynasties), the brick temples of Sumeria, and the first cities of the Harappa culture in India, and a century or two earlier than the Golden Age of China. Unusually fine for their early date, and with a remarkably rich survival of evidence, these sites stand as a visible symbol of the achievements of early peoples away from the traditional centres of civilisation...The Ring of Brodgar is the finest known truly circular late Neolithic or early Bronze Age stone ring and a later expression of the spirit which gave rise to Maeshowe, Stenness and Skara Brae.